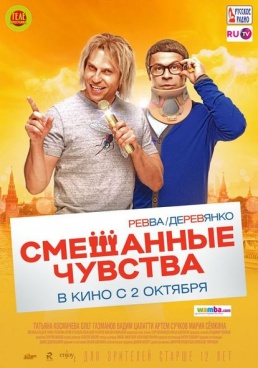 Synopsis:
They are so different, but they should not have come across each other in ordinary life. Phil (Alexander Revva) is the former star of the 90s who in the past became famous after one single song. Now he runs a DJ, feels jealous of Oleg Gazmanov and hates any responsibilities. Petr (Pavel Derevyanko) is an ambitious doctor, reserved and pedantic. He records his daily plans on a tape, he is also afraid of asking a girl out on a date and has no idea who is Gazmanov.

After experiencing the electric shock, they begin to have feelings towards each other. When one is hurt, the other one wince from pain and when one of them is scared, it also frightens the second one. When one of them is laughing, the other one is involuntary laughing too. Cheerful life and acute emotions of Phil demolish the systematic life of Petr first, and then it results in a more serious problem when Phil falls in love with the same girl as Petr