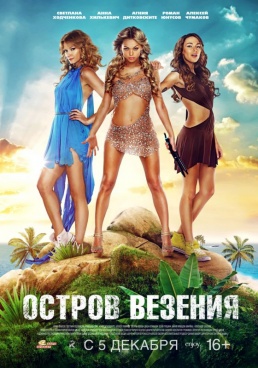 The Isle Of Luck

Synopsis:
A cruise Pacific ship. Half-naked beauties, participating in a beauty contest. Champagne and blue ocean … A former television star and in the meantime a manager at cheap weddings, have not even dreamed of that. However, the cruise of the dream is suddenly interrupted by the chain of incredible events. And our character finds himself  on a desert island, surrounded by the three finalists of the beauty contest – a damned wretch (Agnia Ditkovskite), a scaremonger (Svetlana Khodchenkova) and a classic blonde (Anna Khil’kevich).

What to do? After they lost the opportunity to win the highly desired winner’s crown, the girls would probably tear it to pieces …. So the contest needs to be continued! Pretending that everything goes on as it was planned to be, Roman begins the show. He convinces the girls that the island is full of hidden cameras and microphones, that the show is being screened on one of the main channels, and the whole country is now watching the finale of the beauty contest! And all you need to do – is to pass a couple of tests at gunpoint out of that nearest coconut … that is the camera. And while the girls are participating in the competition, our character is looking for some way to escape from the island.