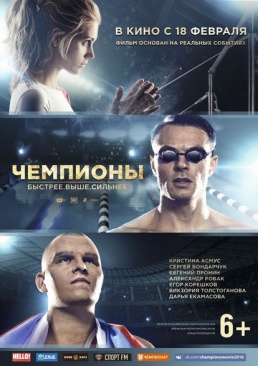 Synopsis:
The world called them as “Road Roller”, “Queen of the Bars” and “Russian Torpedo”. Wrestler Alexander Karelin, gymnast Svetlana Khorkina and swimmer Alexander Popov – true stories of three legendary Russian sportsmen on joint account of which there are 9 gold Olympic medals and more than thousand victories! Each of them had his own way, a unique dramatic history of ascension. Three bright stories based on true events will tell us about things which were left behind-the-scenes of sportive chronicles and about hardships of the heroes on their way to the highest sports achievement – Olympic champion title. They’ve become legends of world sport and let the entire country say “We won!”